Filed under #observations and #softwaredevelopment

Been working through some spaghetti code tonight. Has been helpful to remember not to despair over how tangled the code is. Just treat it like you'd untangle a bundle of wires, slowly and deliberately solve small problems until the big problem is better. My code is in much better shape two hours later 😃

I once found a small fishing longline, approx 180m I'd guess. I guess it was probably last used by my late grandfather or some of my uncles before they moved out. It obviously hadn't been used in a few years and it was really tangled. Think of a really tangled wire, then add about 100 wires (snoods) to that, each with a hook on the end.

Untangling such a thing can be really frustrating. Or it can be relaxing. It all depends on the state of mind you are in when you do it which – in many cases – depends on the reasons you have for doing it.

I find the same holds true for code. I can enjoy untangling code when I have time for it and when there is a good reason for it.

A couple of quick observations about sleep

Filed under #health #sleep and #observations

I'm working from home and I'm noticing the effects more sleep and less stress does to my mind. Normally I fall asleep immediately. Yesterday I went to bed around midnight and didn't feel tired at all. So I had to dig out my favourite falling asleep trick, probably learned from HN: I count backwards from 1000.

I was asleep before nine-hundred-and-eighty.

I guess I should have learned the lesson now, just because I don't feel tired doesn't mean I shouldn't sleep. I won't do anything useful anyway, not even read a book but I can easily wastenan hour playing Polytopia or something.

The second observation is that just because I sleep more doesn't mean that it is easier to get up in the morning: I normally get up right before 0400 in the morning.

One would think that going to bed less tired would make it easier to get up in the morning. At least for me that isn't true at all. Oversleeping is actually a lot easier now and I'll probably have to repeat my getting-out-of-bed drill.

Filed under #observations, #messaging and #psychology

When attempting to enforce real name policies in online foras discussions tend to get dumber.

I guess because real name policies work better against smart and nice people than against trolls.

I also wonder if, just like how people in nice cars on average seem to behave badly more often, people who have little to fear (powerful, has correct opinion) has a tendency to behave badly online more often. But I don't have data (yet at least).

Bikes and E-scooters, early in the morning

Filed under: #lifeInNorway, #observations and #photo

The last couple of years we've seen a huge diversification of bikes and I'm hoping to get some usable photos of all kinds of weird and wonderful bikes-with-electric-motors. (My phone is too slow to catch them in use ;–)

So for now, here are some ordinary bikes parked under a bridge: 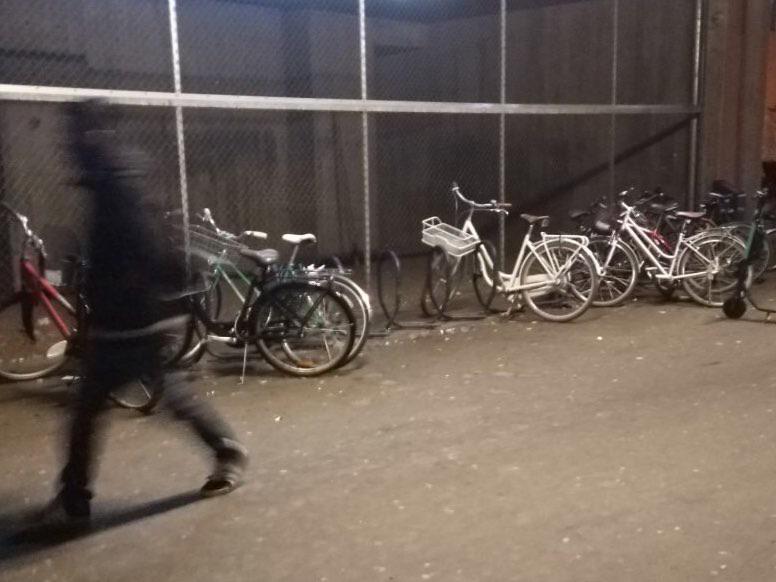 Also E-scooter companies have been really busy trying to become a trend this year, but haven't succeeded yet as far as I can see. Here are some of them: 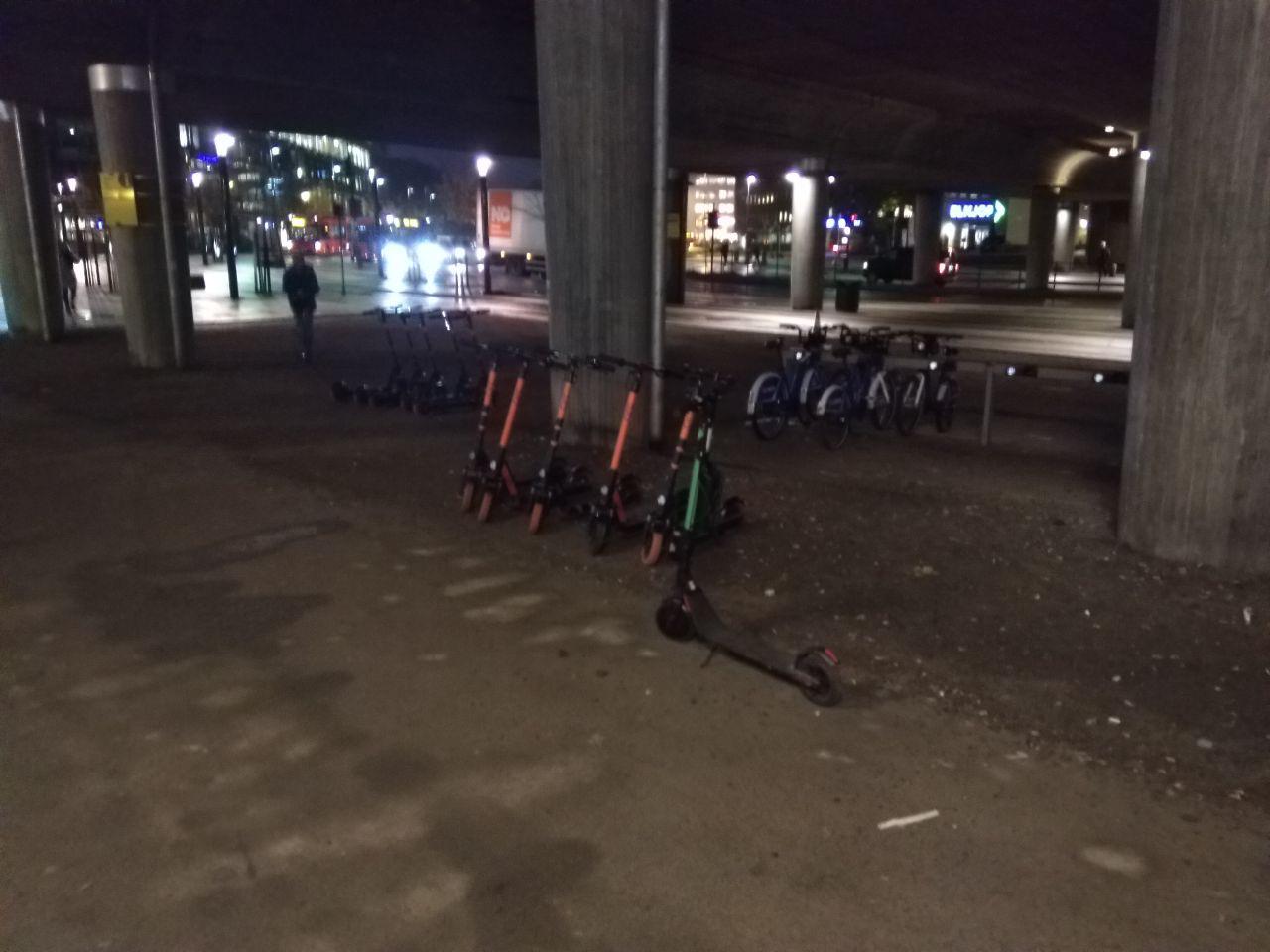 Filed under #observations and #books

I'm currently listening to “Getting Things Done” by David Allen.

This is a revised edition of the original and I find it even easier to relate to. It is also more than ten years since I read the original and I'm realizing that I've been further away from the ideas than I thought. I probably wouldn't have appreciated it so much however if I hadn't been experimenting so much the last >10 years.

The first chapters are freely available and – in my opinion – probably very well worth reading if you work in a tech related position where your decisions in any way affects the product.

I also find myself reading the Bible more.

After all, life is short, and in the words of someone else: “[to be more effective] do more of what works.”

Picking a seat in the bus, the Norwegian way

Filed under #lifeInNorway, #observations and #howto

(Might apply for other Scandinavian countries and certain other countries as well, see video of Swedish people waiting at the bus stop at the bottom of this post. )

As you walk into the bus, scan the seat rows.

Take with a grain of salt, and always apply common sense. Also it is a bit short; I wrote it in around 15 minutes, on the bus.

BTW, avoiding people on the bus is seen as polite, even if you know them.

Will try to get back with some advice on how to pick a seat on the train (if you can get one, that is 😎 )

Filed under #observations, #risingearly and #lifehacks

Another work day where I wake up early. But I've made a change to my early morning habits:

The plan is now:

The second last item on that list might sound weird to almost everyone else but I can forget looking at or even thinking about Instagram for days or weeks.

That might sound great for someone who struggles with addiction to social media, and I guess it is less annoying and dangerous,but also means I miss out on a lot of what is happening.

So for now I'll try this to see if I can include a healthy dose of updates from friends and family.

I've been trying this for less than a week, so add a pinch of salt, but I feel I'm into an habit that can work well for a few weeks.

The problem with AGPL

Filed under #opensource and #observations

I wrote this the other day:

Also you can ask 20 honest developers what they think AGPL means and get 3 or more wildly different explanations, at least if you include “I've no idea except it also works lver the network”.

Besides the typo I immediately also go a message that I could stop spreading FUD and instead point people to https://www.gnu.org/licenses/why-affero-gpl.html

Which I have hereby partially done by adding that link.

My point still stands: developers don't know what the AGPL means, and here are two, just from the replies to my comment:

Edit: I should point out that I find these to be very reasonable and not too far from my understanding of AGPL.

Is it not “if you take AGPL code and run it on your server and make it available to other people, you need to give them the code to whatever you're running”? saagarjha

It's the “whatever you're running” that gets complicated if you're using the AGPL code in conjunction with a bunch of other code to deliver some service to customers. What are the rules around how that other code is allowed to interact with the AGPL code before it has to be made available as well? ghaff

And this is just the beginning. I think I've even seen people moving to AGPL while claiming that it wouldn't affect its users at all (the project in question used to be MIT licensed IIRC.)

While I personally think most software should be licensed under permissive licenses such as BSD, MIT and Apache I haven't seen any problems with AGPL.

It is however clear to me that the FSF has some work to do to get people to understand what the AGPL allows and doesn't allow.

Haven't written for a few days, so let me just write some observations from Norway.

1: man in suit with consumer laptop

The man on the same train as me. He is probably 10 years or so older than me. He is probably traveling. He is writing on what seems to be a consumer laptop from HP. OS seems to be Vista, based on Window decorations but I really don't want to look at other people's screens so I'm not sure. I notice there's no privacy filter though and I feel thankful that I have one on my laptop.

Thoughts: I wonder what I do that make me look unprofessional (except this blog, that is.)

The man is probably in his early 20ies. Red hoodie under a dark coat. Lights a cigarette before he's even out of the train station it seems.

Thoughts: Wow, that was unusual. And wow, the tireless campaigns against smoking has worked. When I was a teenager in the 90ies smoking was usual, you could buy cigarettes from age 16 and I have a memory of one of my childhood friends openly taking his parents tobacco from age 13, rolling a cigarette without them raising an eyebrow.

3: The National Budget for Norway was launched yesterday

Thoughts: As expected. And I think see signs of them expecting to lose the election in a 2021. Which I kind of expect too.

4: The hunt for Stallman continues

Yesterday a number of GNU maintainers signed a petition it seems.

Thoughts: I'm happy I won't have to defend everything he has said or done and I'm also happy I'll not be the judge for this one. However I have some thoughts about the meta discussions:

Some people say that “innocent until proven guilty” should only be used in courts.

Whatever the result of this particular case, we have already been at a point where media and the Internet can sometimes dish out way harsher sentence than the courts for a long time already.

I'm wondering if this should have some consequences for how media report on rumours.

Windows is getting ready for my desktop

Filed under #tools and #observations

Update: made quite a few edits, footnotes/references should align now.

With playful reference to https://blog.enoch.kim/the-year-of-the-linux-desktop-is-further-away-than-ever-before which I enjoyed reading and which seems to be a mostly true description of the state of the art:

An incredibly long diatribe of my struggles moving back to Linux

I'll say right off the bat that Windows is the not the ideal OS. I recently set out to put a Linux distro back on my laptop after growing frustrated with my Windows install...

Especially the part about making a bootable usb stick is relatable to me: when I am happy with my setup I leave it alone and work so until recently the last I installed Linux was sometime back in 2016 or so. Trying to install Linux this year has been a pain until I realized balena etcher is the only tool that works reliably now. After that however I haven't had many of the problems mentioned – but that is only because I know better and usually go straight for the worlds best desktop environment[0][1] instead of trying to make Gnome usable for me ;–)

Personally however I mostly use Linux except when customers demand I use Windows. Using Windows mostly isn't a problem at all, except for testing my patience, but my patience kind of depends on the situation, and if somebody pays me to send 50% longer time waiting for builds I'm fine with that[2].

[0]: The best distro I found is availble here: https://neon.kde.org/

[1]: Of course, beauty is in the eye of the beholder. Sometimes I think rationality is as well. I even know smart, extremely productive programmers, way better than me who use Mac, but if I didn't I wouldn't believe it, at least not right away.

[2]: But if you are a programmer and don't ever get annoyed by waiting for your computer then maybe one or more of you, your employer and/or customers could maybe[3] benefit if you studied “Three great virtues of a programmer” (quoted from Larry Wall himself in his “Programming Perl”, 2nd edition according to that site).

[3]: Alternatively if you program in a mainstream language and everything is super smooth you should feel free to make a blog post about your setup and tell me about it, contact details in the pinned about page, probably visible as a link on top of this page.