Haven't written for a few days, so let me just write some observations from Norway.

1: man in suit with consumer laptop

The man on the same train as me. He is probably 10 years or so older than me. He is probably traveling. He is writing on what seems to be a consumer laptop from HP. OS seems to be Vista, based on Window decorations but I really don't want to look at other people's screens so I'm not sure. I notice there's no privacy filter though and I feel thankful that I have one on my laptop.

Thoughts: I wonder what I do that make me look unprofessional (except this blog, that is.)

The man is probably in his early 20ies. Red hoodie under a dark coat. Lights a cigarette before he's even out of the train station it seems.

Thoughts: Wow, that was unusual. And wow, the tireless campaigns against smoking has worked. When I was a teenager in the 90ies smoking was usual, you could buy cigarettes from age 16 and I have a memory of one of my childhood friends openly taking his parents tobacco from age 13, rolling a cigarette without them raising an eyebrow.

3: The National Budget for Norway was launched yesterday

Thoughts: As expected. And I think see signs of them expecting to lose the election in a 2021. Which I kind of expect too.

4: The hunt for Stallman continues

Yesterday a number of GNU maintainers signed a petition it seems.

Thoughts: I'm happy I won't have to defend everything he has said or done and I'm also happy I'll not be the judge for this one. However I have some thoughts about the meta discussions:

Some people say that “innocent until proven guilty” should only be used in courts.

Whatever the result of this particular case, we have already been at a point where media and the Internet can sometimes dish out way harsher sentence than the courts for a long time already.

I'm wondering if this should have some consequences for how media report on rumours.

Did they say anything important?

I pointed out to the conductor who checked my ticket the other day that in the carriage I was sitting in the announcements was impossible the hear, even for a young healthy adult.

Considering that they – like flight attendants – primarily are there for safety reasons, this made sense to me.

She wasn't very interested and more or less asked me to report it on my own. I'll try to get around to that but based on previous experience I don't have high hopes.

At this point the person sitting next to me, someone working in a major railroad infrastructure company (judging by their ticket and their id card) turns to me to ask if there was anything important in the announcement.

There was no way I could know but this time it probably wasn't as the train continued according to schedule. But that is kind of missing the point: if the speaker is broken now it will also be broken if the train is stuck in a tunnel and a fire has started in one end and you need everyone to evacuate the other way.

In a time where conductors fight against privatization and (correctly) try to brand themselves as safety personell I think it might make sense to fight tooth and nail for the safety of their passengers.

I liked the old web: – before SEO was a thing – before blogging became a profession – when websites where still quirky – before you had to have a Facebook account to post comments – etc

This is my attempt to recreate a tiny part of it.

A clock with no hands

Filed under #art and #guerillaArt 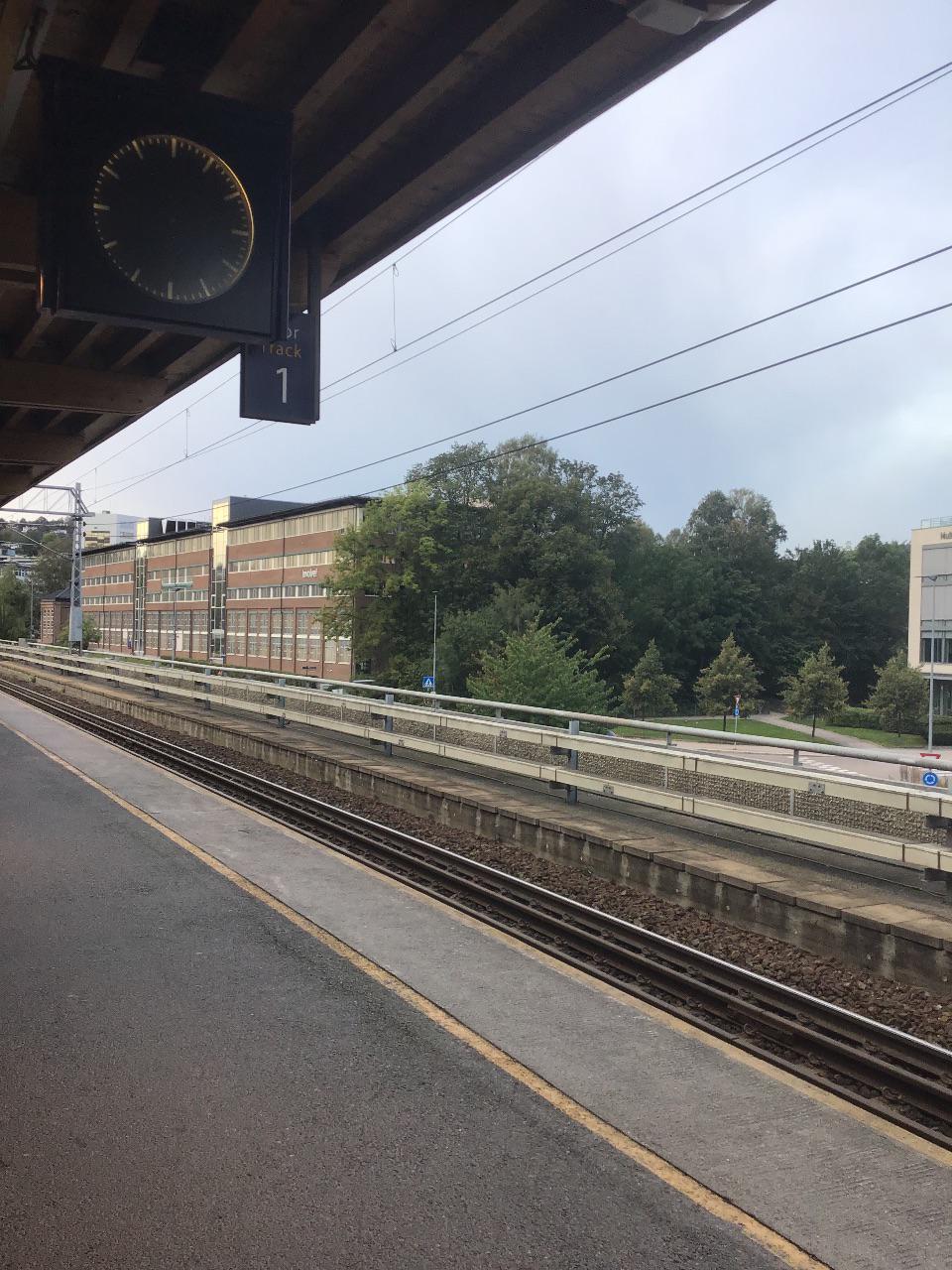 My guess is this wasn't planned, but then again in practice there often is little difference between certain kinds of art and just a messed product, isn't it ;–)

Windows is getting ready for my desktop

Filed under #tools and #observations

Update: made quite a few edits, footnotes/references should align now.

With playful reference to https://blog.enoch.kim/the-year-of-the-linux-desktop-is-further-away-than-ever-before which I enjoyed reading and which seems to be a mostly true description of the state of the art:

An incredibly long diatribe of my struggles moving back to Linux

I'll say right off the bat that Windows is the not the ideal OS. I recently set out to put a Linux distro back on my laptop after growing frustrated with my Windows install...

Especially the part about making a bootable usb stick is relatable to me: when I am happy with my setup I leave it alone and work so until recently the last I installed Linux was sometime back in 2016 or so. Trying to install Linux this year has been a pain until I realized balena etcher is the only tool that works reliably now. After that however I haven't had many of the problems mentioned – but that is only because I know better and usually go straight for the worlds best desktop environment[0][1] instead of trying to make Gnome usable for me ;–)

Personally however I mostly use Linux except when customers demand I use Windows. Using Windows mostly isn't a problem at all, except for testing my patience, but my patience kind of depends on the situation, and if somebody pays me to send 50% longer time waiting for builds I'm fine with that[2].

[0]: The best distro I found is availble here: https://neon.kde.org/

[1]: Of course, beauty is in the eye of the beholder. Sometimes I think rationality is as well. I even know smart, extremely productive programmers, way better than me who use Mac, but if I didn't I wouldn't believe it, at least not right away.

[2]: But if you are a programmer and don't ever get annoyed by waiting for your computer then maybe one or more of you, your employer and/or customers could maybe[3] benefit if you studied “Three great virtues of a programmer” (quoted from Larry Wall himself in his “Programming Perl”, 2nd edition according to that site).

[3]: Alternatively if you program in a mainstream language and everything is super smooth you should feel free to make a blog post about your setup and tell me about it, contact details in the pinned about page, probably visible as a link on top of this page.

If you want to laugh at Norwegians now is a good time: Local elections edition

Filed under #lifeInNorway and #politics

So we just had local, i.e. county level and municipality level elections a week ago or so.

The funny part? Every major news outlet seems to have gotten it wrong and wrote about national politics, interviewing the same top politicians again and again on topics related to national elections.

It might actually be worse, depending on how you look at it: I guess they knew very well, and just decided to make entertainment out of it instead of being journalists.

I see myself as someone who roots for journalists, I buy more newspapers that I read and I generally defend them, but sometimes the criticism of mainstream news outlets is really fair IMO.

More fighters in the air

Filed under #observations and #lifeInNorway

My watch says it is almost eight in the evening. I'm on my way home from work.

Another fighter is in the air. I like the sound of them. Hope we never have to use them for real.

And, kind-of-ironically-but-not-really, keeping a strong defense seems to be one of the best ways to avoid having to use it. (Norway tried pacifism in the 30ies. The experiment ended somewhat abruptly when Hitler invaded 9th of April 1940.)

... and Googles AI still insists the most relevant shortcuts it can sbow me is the ones to text someone I hardly know – or call a project manager at work.

Artificial Intelligence is still hard it seems but sometimes they nail Artificial Stupidity.

Planes roaring in the skies above

Filed under #observations and #lifeInNorway

The army is training this week. I think it is the “Oslofjord” exercise. On the radio the other day they said there were going to be 3000 troops, F16s and F35s.

Almost everytime I hear fighter jets or see army helicopters I'm reminded about how lucky I am to live in Norway.

Filed under #productivity, #lifehacks and #habitstacking

And sometimes it doesn't matter: waiting for someone to reply, for a compile or upload to finish. But often it is a waste of time.

I recently realized that while it is hard to break the first part of the habit, and removing all the triggers is impractical, I can easily stack another habit on top:

I have now trained myself so that whenever my fingers type that pattern they also automatically type ctrl – w to close the tab before even loading it.

I did that by intentionally repeating the first part of the pattern, then closing the tabs and rewarding myself by smiling.