Filed under #ux and #challenges

Recently my bank delighted me by replacing the steps to transfer money between my own accounts by a vastly simplified version. Here's what the old version felt like: 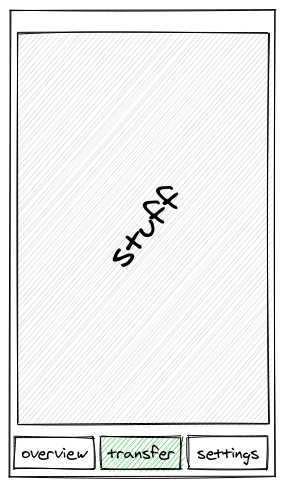 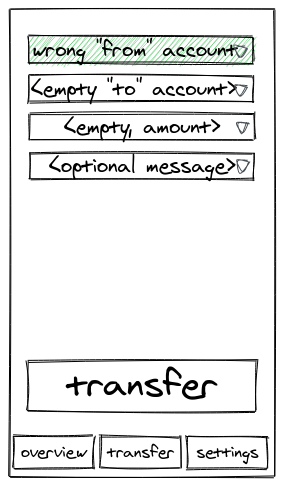 Step 2.1: Open the drop down to select an account to transfer money from 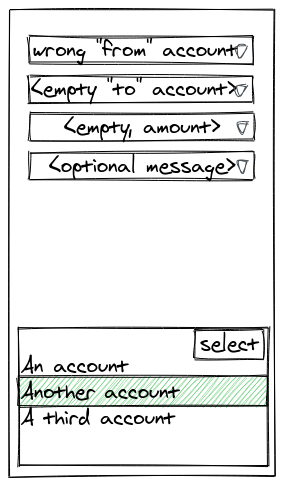 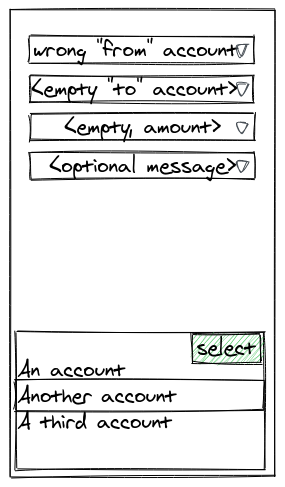 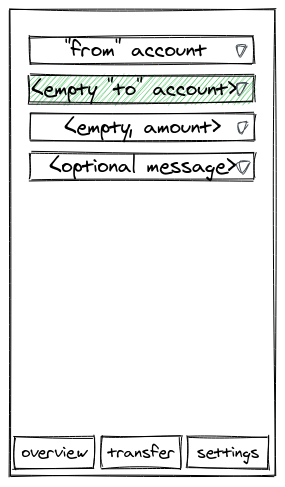 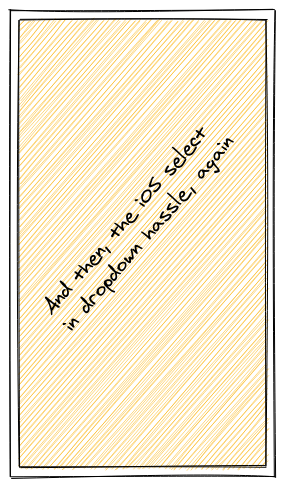 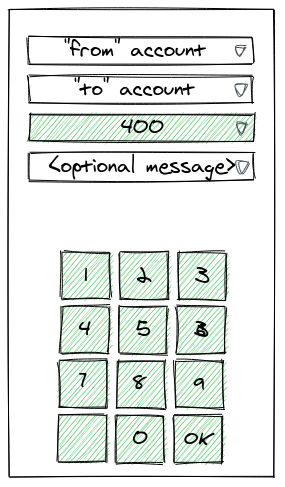 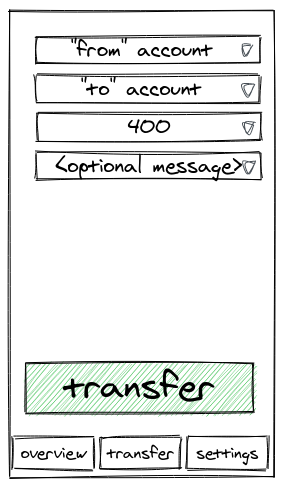 This gets old really fast but I wasn't aware just how bad it was until an improved flow showed up as part of the beta program that I participate in.

I'll leave this here in case anyone wants to give it a stab, and I'll try to get around to posting their solution.

BTW: illustrations are created using the excellent excalidraw, open source and reasonably easy to work with.

Feel free to send me a message @eitland@mstdn.io if you have a better flow. I don't exactly have many readers so I don't expect this to happen but at least it is an option. I don't care. I write because I think writing is smart.

A different type of browser, that could possibly work on iOS

Filed under #ideas #iOS and #internet

This is just an idea and I haven't thought to closely about it yet, but what if we made a browser similar to Opera Mini? I.e. a proxy server on the backend would download the pages, render them and ship a snapshot of the DOM to the actual browser, only with all the links rewritten to point to itself?

Alternatively this could even work without a separate browser instance but the ux would be harder.

Obviously this could create a lot of privacy issues but it is not completely clear cut that it couldn't be better for some people:

Haven't seen the movies, but the music has helped me focus the last few days:

Waiting for brake parts, tidying up and alarm clocks – day 5

During the weekend I enjoyed fixing the armrest on my porch swing.

I also ordered some brake parts which I hope will be here by tomorrow.

Yesterday, after trying to work a full day from my spare bedroom/office I filled the back of the car with assorted garbage and drove it to the recycling center. I feel kind of lucky compared to some friends of mine that I met up there that were dumping their third trailer full of stuff from their garden and basement.

Yesterday was also the day where I decided to take down the tent in the garden as it was starting to get annoying to have to move it around in the garden to avoid damaging the lawn. It is starting to become a family tradition it seems to tent outside around easter or as soon as the snow is going away, but this year the tent stayed up until now, partially as an emergency office should it become too noisy inside the house and partially as a place for the kids to play when they weren't allowed to go elsewhere.

While packing the tent I found a bumblebee that had somehow got trapped inside. Poor creature. I try to help those in the spring and I tried to keep the tent closed, mostly as a precaution against cats, but when the kids play they leave it open and I sometimes forget to check that it is closed before I go to bed.

It now seems my iPhone alarm clock is enough to get me out of bed before 0400. That would be great as the Sleep app does not exist for iPhone and all the others that did exist lacked the killer feature from Sleep: an NFC scanner that could be configured to be the only way to turn the thing off.

This morning I have found some interesting software/websites:

Made a new armrest during the weekend – day 4

We got a porch swing this weekend, and I made a new armrest: 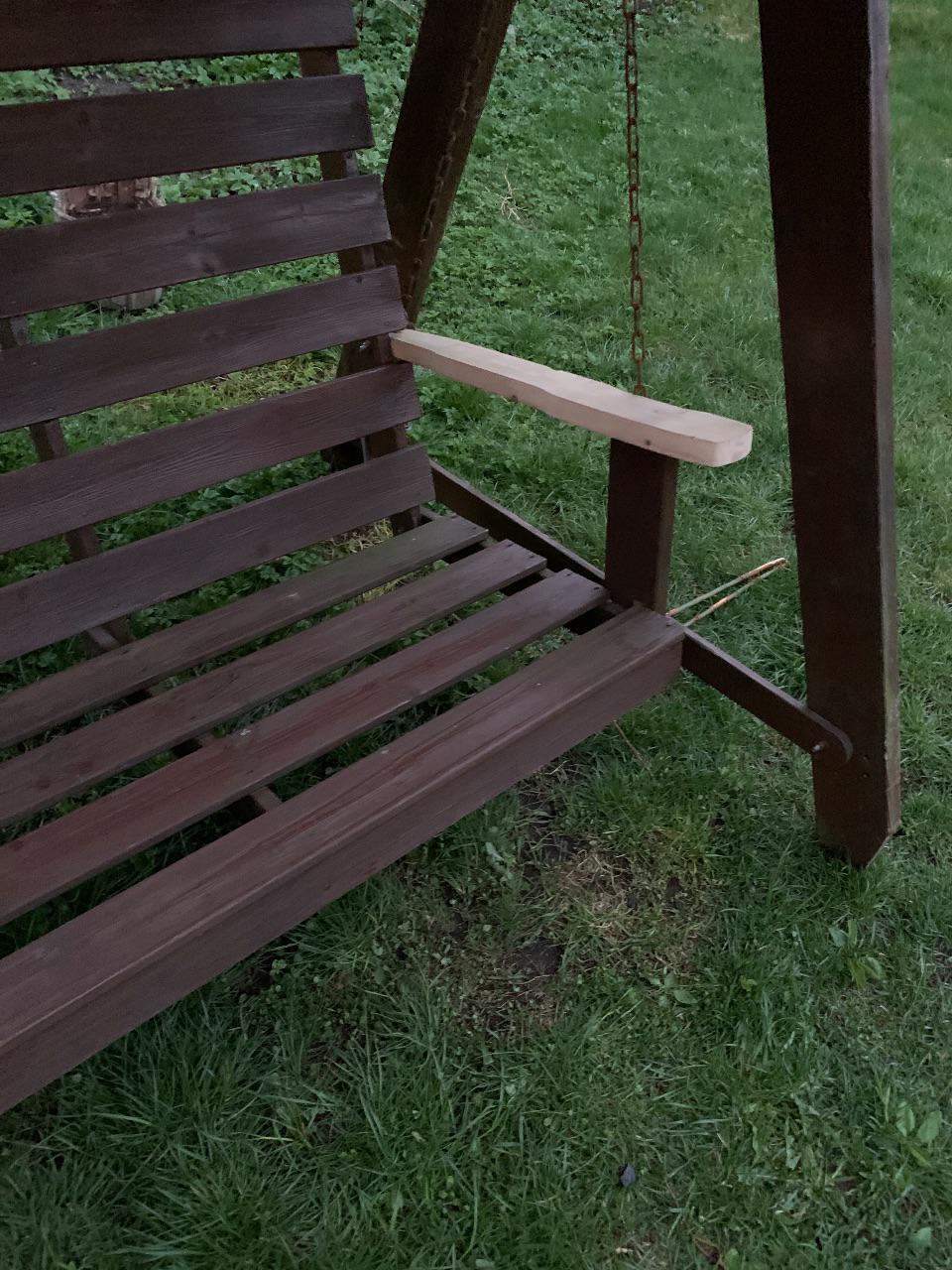 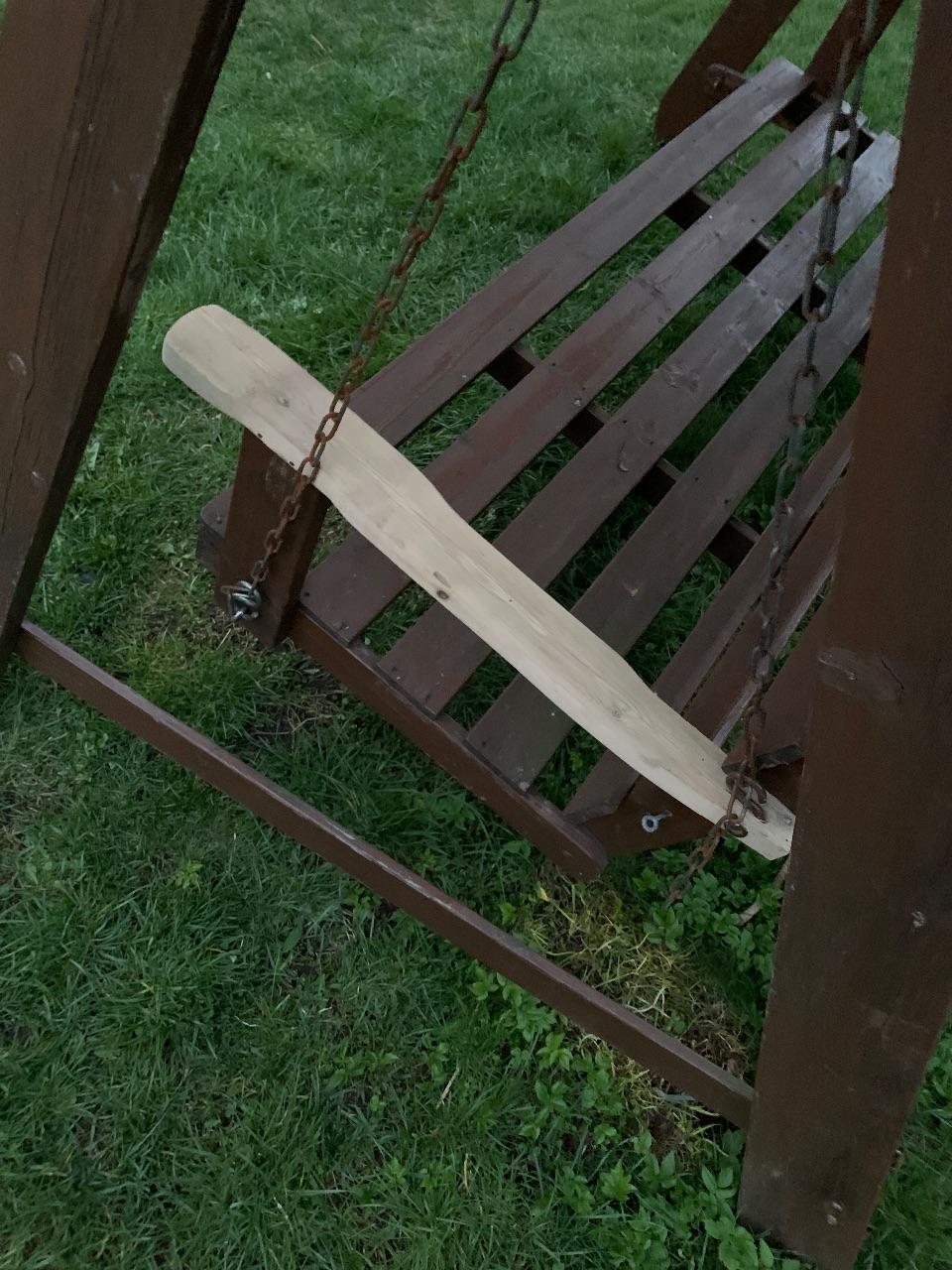 The previous armrest was so rotten it could be picked apart by hand and was not in one piece when I got it so i had to be a bit creative and use everything I learned in the woodworking class in seventh grade and some and then apply some elbow grease on top :–)

A short post about permissions in web applications – day 3

Filed under #100DaysToOffload, #security and #auth

When I was younger I downloaded extensions without thinking much. Mostly extensions for Firefox.

As I got older and interested in security I've become a lot more careful. I know I'm not completely safe against malware, but then again I don't wear a hazmat suit at work either.

I've found some reasonable heuristics that have worked well for me and I should probably write a bit more about that some other time – possibly along with some ideas for truly paranoid organizations, but today I want to write about some wishes I have:

And a day has passed since last I wrote. But it doesn't matter according to the rules.

Filed under #100DaysToOffload, #habits and #learning

I've written about this before.

When learning something, it can be very useful to put deliberate effort into repeating the winning moves. Depending on your background this might be obvious or not.

Probably less known is that this works in other areas of life as well, not just in sports.

For example I train my fingers for the shortcuts of my IDE and when necessary I even rehearse my getting-out-of-bed-without-waking-up-everyone-routine.

It is also possible to train “moves” that prevent oneself from getting distracted: an incredibly useful one for me is training my fingers to stop myself from mindless browsing: I once noticed that I had a habit of opening news sites too often when stuck. Remembering to stop is hard once it has become a habit.

Instead I find it easier to learn a new pattern. Say you want to stop mindless browsing of example.com during work hours. What I do once I notice this pattern is to deliberately repeat the first steps of my bad habit, only I choose my own steps at the end, in the case of example.com I'd do this:

Yesterday Tom Hagen was arrested and helt on suspicion of murder or complicity to murder. Police say they've been investigating this possibility secretly since last summer. I guess we all knew this was a possibility, and many had a hard time not saying it out aloud. I guess I should give kudos to media for being careful. It surely would have looked bad if they had written it out early and it turned out to be wrong.

Some criticize the police for not realizing this immediately. Personally I think they considered this from day one, only not as the most probable explanation until last summer and not publicly until now. After all police is 3 years higher education around here and it is popular so I guess the ones who get in are brighter than the average Norwegian.

Around here the sun is shining outside. I took some photos but won't post them, I don't have time.

Also I forgot to close the lid on my micro greenhouse tonight so I really really hope the tomato plants survived as I see hoarfrost on the grass. BTW: some nice images

Some ideas for future writing:

In fact I've already sketched up the old flow in excalidraw and I'm excited to post it but it is already 0633 and I need to start working.

If I forget, you can try to bug me at @eitland@mstdn.io

Filed under #observations and #softwaredevelopment

Been working through some spaghetti code tonight. Has been helpful to remember not to despair over how tangled the code is. Just treat it like you'd untangle a bundle of wires, slowly and deliberately solve small problems until the big problem is better. My code is in much better shape two hours later 😃

I once found a small fishing longline, approx 180m I'd guess. I guess it was probably last used by my late grandfather or some of my uncles before they moved out. It obviously hadn't been used in a few years and it was really tangled. Think of a really tangled wire, then add about 100 wires (snoods) to that, each with a hook on the end.

Untangling such a thing can be really frustrating. Or it can be relaxing. It all depends on the state of mind you are in when you do it which – in many cases – depends on the reasons you have for doing it.

I find the same holds true for code. I can enjoy untangling code when I have time for it and when there is a good reason for it.

Taking part in the 100 days to offload challenge – day 1

The tag #100DaysToOffload started showing up a few days ago and I didn't care. My life is really stressful enough as it is without putting more arbitrary limitations, deadlines or anything into it. I got a family, a job, a house, a car and I try to be active in the church so I figured really don't want more stress on top of that. For the record: I chose that life and I don't want anyting to get in the way of it.

Then I read the rules. The rules are similar enough to the The Cult of Done Manifesto that I figured it might actually take away some stress.

So here I am. This is the first part in this series. I don't expect this to bring me a lot of readers or anything, just to get more stuff written down for the benefit of my future self, future historians and people searching for random words or constellations of on the Internet. Maybe it will also trigger someone else to start writing longform instead of just tweeting, tooting, snapping or whatever.

So here are the guidelines as they were written at the time when I decided this could be a good idea:

I don’t like to term ‘rules’ so let’s go with ‘guidelines’ instead. As I don’t think this whole thing shouldn’t be too rigid. Here’s the guidelines as I see them:

Of these I know I will take liberties with regards to getting my friends involved.